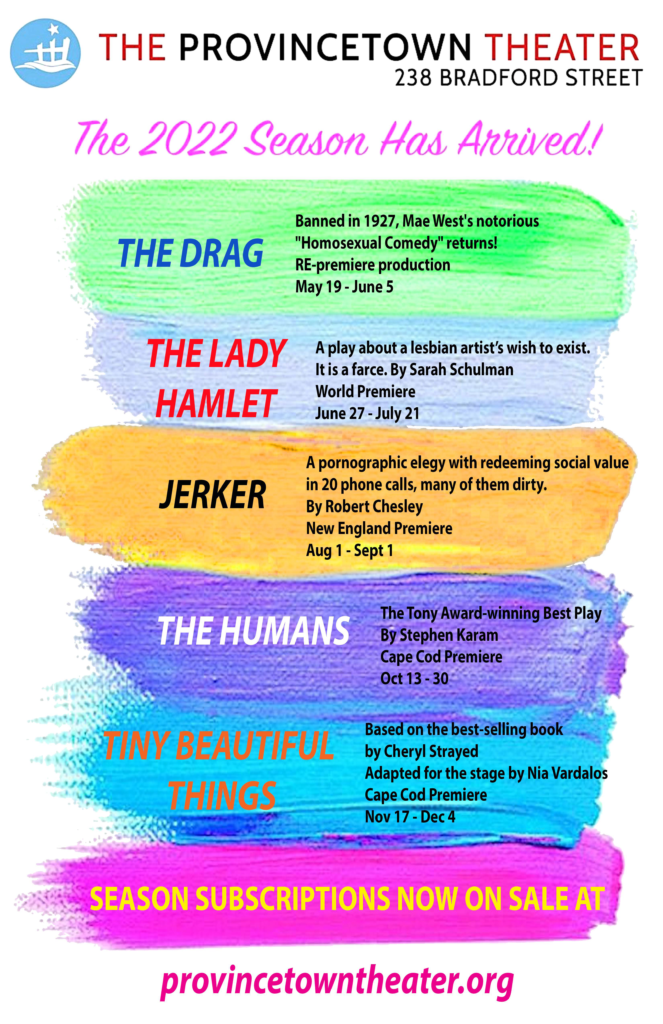 We are thrilled to announce our 2022 season, which includes FIVE full-length productions over the course of the year:

The Drag by Mae West

May 19 – June 5 heralds the re-premiere of Mae West’s notorious melodrama The Drag. Described by the author as “A Homosexual Comedy,” The Drag was shut down by the Vice Squad in 1927 for “corrupting the morals of youths” because it told the taboo tale of a closeted Park Avenue newlywed and his secret double-life with a pack of Greenwich Village drag queens. Banned in Bayonne, The Drag never reached its destination of the Great White Way. Still as funny and relevant as it was nearly 100 years ago, the Provincetown Theater’s mounting of West’s forgotten work will be its first professional mounting since the cops closed her down in 1927.

The Lady Hamlet by Sarah Schulman

June 27 – July 21 will witness a dazzling new play by the acclaimed novelist, historian and playwright Sarah Schulman with the world premiere of The Lady Hamlet. A whip-smart costume comedy with one foot in screwball and the other in a cerebral fencing match over the definition of gender, The Lady Hamlet watches a duel ofdivas at the turn-of-the-century in a fierce battle to see who will be the first – and best! – female Hamlet on Broadway.

Aug 1 – Sept 1 will see the Cape Cod premiere of the late Robert Chesley’s sensuous love story Jerker. Following two gay men in 1980s San Francisco, Jerker charts the development of their romantic relationship via the oft-ridiculed use of phone sex. Upon its 1987 off-Broadway debut, the New York Times keenly observed: “Jerker accurately bills itself as ‘a pornographic elegy with redeeming social value’ and its gamy language and simulated autoeroticism are definitely not for squeamish tastes. But they serve a poignant purpose by pointing out, more bluntly than any other play dealing with Acquired Immune Deficiency Syndrome, how the epidemic has threatened one of the fundamental reasons for an entire group’s very existence – its freedom of erotic expression – and challenged its hard-won self-esteem.”

The Humans by Stephen Karam

October 13 – 30 will see the Cape Cod premiere of Stephen Karam’s Tony Award-winning Best Play of 2016, The Humans. In a haunting 100 minutes, The Humans witnesses the story of an American family who’ve gathered for Thanksgiving dinner in the youngest daughter’s duplex apartment in lower-Manhattan. Sifting through the shadows of 9/11, this contemporary drama reveals the fears, joys, bonds, and anxieties of our world today. Along with the Tony Award, The Humans was also the recipient of the Best Play Award from the Drama Desk, Outer Critic’s Circle, Drama League, Obie Awards, Lucille Lortel Awards, and the NY Drama Critics Circle.

Tiny Beautiful Things by Cheryl Strayed, adapted for the stage by Nia Vardalos

Nov 17 – Dec 4 just in time for the holidays, we’ll welcome the Cape Cod premiere of Nia Vardalos’s stage adaptation of the New York Times best-selling book by Cheryl, Tiny Beautiful Things. With its authentically-lived core, the stage play personifies the questions and answers that “Sugar” was publishing online from 2010-2012, when the struggling writer (Strayed) took over the unpaid, anonymous position of an advice columnist. Tiny Beautiful Things is a play about reaching when you’re stuck, healing when you’re broken, and finding the courage to take on the questions which have no answers.

Tickets to our first three productions are on sale now at bit.ly/PTF_Tkts