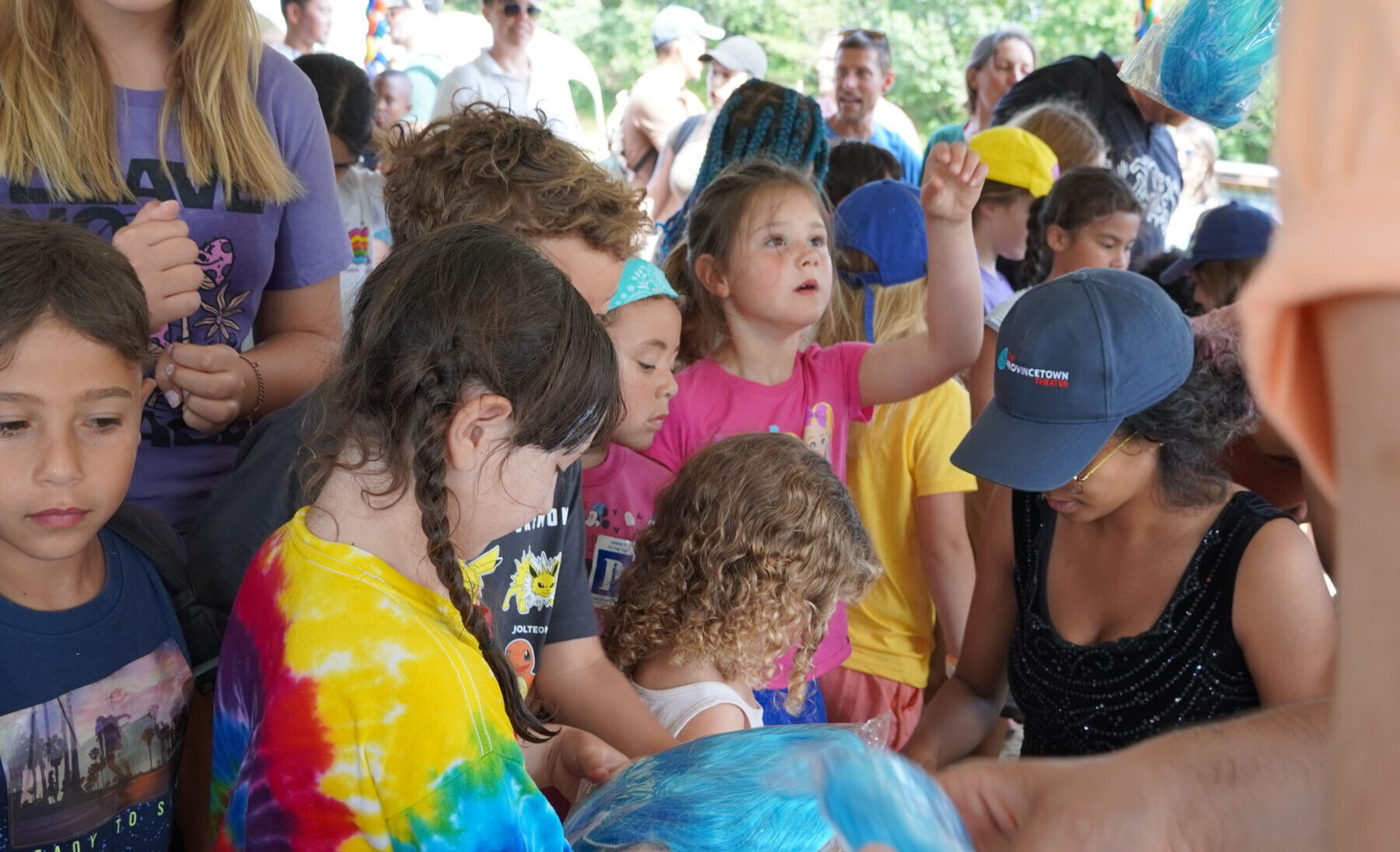 David Drake has been putting on shows since he was a kid. Directorial credits at the Provincetown Theater include It’s a Wonderful Life: A Live Radio Play, Sweeney Todd, August: Osage County, Always…Patsy Cline, Love! Valour! Compassion!, Our Town, and his gender-swapped production of The Importance of Being Earnest.

In New York City, David has directed works at Rattlestick, The Flea, Soho Playhouse, and Joe’s Pub. Collaborating with Taylor Mac, he directed and developed The Lily’s Revenge at the Sundance Theater Lab prior to staging its world premiere at HERE in New York (Obie Award). Also with Taylor, David directed the world tour of The Be(a)st of Taylor Mac.

As an actor, David got his Equity card off-Broadway replacing Charles Busch in Vampire Lesbians of Sodom at the Provincetown Playhouse. He appeared in the original New York casts of A Language of Their Own (Public), End of the World Party (46th Street Theater), Pretty Boy (Performing Garage), and The Boys in the Band (1996 revival at Lucille Lortel). Television: The Good Wife, NY Undercover, HBO’s Vinyl, and as a repeat offender on Law & Order. Film: Longtime Companion, It’s Pat, David Searching, We Pedal Uphill, Philadelphia, and opposite Alan Cumming in After Louie. Regionally, David has appeared at A.R.T., Huntington, Barrington Stage, Arena Stage, San Diego’s Old Globe, and numerous others.

David is the Obie Award-winning playwright and per­former of The Night Larry Kramer Kissed Me, in which he performed a year off-Broadway (Perry Street) before touring worldwide, and then shooting as a feature film. David has taught at New York’s Abrons Art Center, Baltimore’s MICA, and received artist residencies in New York at The BRICLab, DTW, Clemente Soto, Dixon Place.

After earning a B.S. and MBA from Northeastern University, David Wilson embarked on a 30-year career with Verizon Communications serving in a number of middle and senior management positions across New England and New York. David began a second career with Spaulding and Sly, Colliers, a National Real Estate Development Company where he served as the Vice President for Facility and Property management services before retiring.

Following his retirement, David and his husband, Rob Compton moved to Provincetown where David joined The Provincetown Theater Board. He was elected President of the Board in 2017. In addition, David has served in leadership positions on The Human Rights Campaign, MassEquality, and the GLAD board.

A native of Boston, Richard “Rick” McCarthy is a veteran of the banking industry with 37 years of banking and financial services experience. Currently Rick is a Senior Vice President for Commercial Real Estate at U.S. Bank and has responsibility for growth in non-credit revenue for the Commercial Real Estate markets on the East Coast.

Rick has always been involved in the community. As past President of GLAD (GLBTBQ Legal Advocates and Defenders), Rick McCarthy spearheaded many civil rights struggles in Massachusetts and nationally. In 2008, then-Massachusetts Governor Deval Patrick appointed him to the Governor’s Diversity Advisory Council.

Rick’s volunteer opportunities have added to the many leadership skills learned in the banking industry. Rick lives with his husband, Franc Castro, in Boston’s South End and Provincetown, MA.

Jack Hudson graduated from Fairfield University in 1980 with a BS in Accounting, and passed the Certified Public Accountant exam a year thereafter. After obtaining the required work experience with PriceWaterhouseCoopers, Jack joined Avon Products, Inc., in 1984. With the dissolution of a subsidiary in 1989, Jack left Avon for the first time.

Upon returning to Avon in 1993, he was relocated to Avon Mexico/Central America for 3 years. Returning to New York headquarters in 1996, Jack’s focus was on process design initiatives in the U.S., Mexico, Brazil and Argentina. In 1998, he transitioned his redesign skills to global internal audit.

Jack left his Vice President and General Auditor post at Avon in 2002 to join an event production and fundraising consulting company in Los Angeles. Within the first year of employment as COO, Jack bought the company, which he re-named and re-branded OP3. He relocated to Los Angeles where he oversaw all event production and peer-to-peer fundraising consulting services provided to non-profit clients raising money to fight causes such as breast cancer, suicide, multiple sclerosis, intellectual disabilities, HIV/AIDS, Alzheimer’s. The ownership of OP3 transitioned to two employees in 2016, and Jack left the company.

Ermont was sold in 2018 and, since the sale, Jack has been consulting in the marijuana space in Massachusetts.

Donald Vaughan is Partner and Co-Chair of the Real Estate Group for the Boston-based law firm Burns & Levinson LLP. Donald focuses his practice on the representation of parties, including non-profits, in commercial office and retail leases and subleases. He also represents lenders and borrowers in permanent, construction and leasehold financing transactions, many involving tax credits and public or quasi-public financing sources.

Steve Fossella earned his B.S. in Computer Information Systems from Bentley College. He worked in the defense industry with The U.S. Army Corps of Engineers and Raytheon Corp. and for many years in the banking industry with State Street Corporation developing software and managing systems on a global scale.

A published author and credited screenwriter, Christine received a Master of Arts in Liberal Studies from Wesleyan University.

A lifelong lover of theater, Chris recently retired to Provincetown following a nearly forty-year career in law firm technology training and support management in New York City. Chris has served on and/or worked with the boards of ILTA (International Legal Technology Association), PLTG (Professional Legal Trainer’s Group) and been involved with many other professional and personal organizations and not-for-profits in various capacities throughout much of his life.

Michael Onofrio is the Senior IT Business partner at Sikorsky Aircraft, a Lockheed Martin company, the largest business in the Rotary and Mission Systems (RMS) business area. In this capacity, he is responsible for representing Information Technology within the senior leadership at Sikorsky by providing strategic and transformational technologies enabling business growth on all rotorcraft platforms. Michael joined Sikorsky in 1989 and has taken on more significant and increasingly complex business opportunities throughout his tenure.

Michael owned and operated Antiques on Whitney (CT) for 16 years and served as president of the Giant Valley Antique Dealers Association. Michael holds a Bachelor of Science degree in Business Administration and Computer Science and an Executive Master of Business Administration from the University of New Haven. He attended the Darden School of Business’s Emerging Leaders Program.

Michael resides in North Haven, CT, and Provincetown, MA, with his husband Frank and their rescue dog, Savannah.

After more than 32 years in the corporate world, first at Andersen Consulting and then 25 years at Fidelity Investments, Ross took an early retirement package in 2017 to pursue an encore career as an artist. In his final years at Fidelity, Ross was the Chief Marketing Officer for the Institutional Wealth Services Division where he was responsible for comprehensive go-to-market strategies including all branding, advertising, content and digital marketing, events, and thought leadership activities.

Since 2017, Ross has been an entrepreneurial artisan at the helm of rjostudio|HANDCRAFTED. Working in mixed media, Ross has presented his work at juried shows including Craft Boston and Paradise City and has also sold his work at the major international gift shows in the US including NY NOW, Atlanta’s AmericasMart, Dallas Market Center, and Philadelphia Handcrafted. Ross is the Digi-Fab Shop Lead at Artisan’s Asylum, New England’s largest makerspace located in Allston, Massachusetts.

On the theatre front, Ross has been involved as a performer and a musical director all throughout his high school and college career. While corporate life didn’t leave a lot of room for performing, he was an active board member for Speakeasy Stage Company in Boston for many years and performed in a several of their gala ‘Miscast’ events. Additionally, he sang with the Boston Gay Men’s Chorus for over 15 years and served as their treasurer and an active board member for six years.

Andrea McCatherin Sawyer is a Portland, Maine native who first visited Provincetown in 1995 and moved here in 2012 to paint full-time. Previously, she worked for many years as a kitchen designer and as a realtor in the Sebago Lakes region, specializing in waterfront properties. In Maine, she was a 12-year director of the local Chamber of Commerce, a member of Rotary International, active in local politics, and a member and vice president of the Board of Directors of Deertrees Theater, a long-established community theater in Harrison, Maine. In Provincetown, Andrea is a volunteer for PIFF, WOMR, a five-year member of the Visitor Services Board, and has volunteered at Provincetown Theater in many capacities. Andrea is an oil painter currently represented by Bakker Galley and maintains a studio on Hensche Lane. She lives on Provincetown’s East End with her husband, Brian O’Malley.